RafaelO Aisner was born in Lima, Peru to a European family. At age 4, he immigrated to the US and lived there until he finished high school. Curious to explore his birthplace he decided to go live and study biological sciences in Lima. 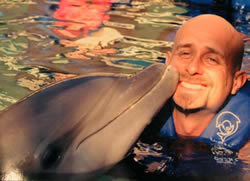 He returned to the US to pursue graduate degrees in Molecular Biology and Biochemistry. A natural born scientist, thrill seeker, and lover of new experiences and adventure, he dedicates his life to traveling and exploring the beautiful world we live in. RafaelO's blend of Euro-Latino-Americana has given him an appreciation for cultural diversity. He believes that to think globally, one must live globally.

At age 30, he was introduced to Entheogens and became aware of the virtually unknown mysteries of the mind. With the skepticism and rigor of a trained research scientist, he embarked on a journey to chart and map the inner mystical and mysterious universe of his mind, as well as, the minds of lovers, friends, acquaintances, willing participants, and random strangers he encountered at raves. His intention of discovering patterns and familiar landmarks, resulted in the creation of a translating dictionary that allows for direct communication between Body, Mind and Spirit. He has also discovered, a series of Master Keys that, so far, unlock every door of the subconscious that he encounters in himself, and the people he works with.

RafaelO has founded The Rosetta Method School of Thought, to teach and develop his novel philosophical blend of Science, Mysticism, Psychology, Health, Urban-Shamanism and Empowerment.

RafaelO believes that each of us are multidimensional mystical creatures; gods, goddesses and deities, as well as physical beings, embodiments of Gaia, placed here on Earth to enjoy the beauty and love of life. He seeks to liberate us from the limitations imposed by repressive cultures, religions, and mythologies, and awaken us to the higher consciousness of Gaia, so that we can, once and for all, live in harmony with ourselves, and our environment.

Rafael0 is currently writing a book, Psychedelogy: A Novel Paradigm of Self. In September, after Burning Man 2006, he is embarking on a 3 - 5 year journey to Thailand and Brazil to further his studies of Consciousness, Metaphysics, Tantra, Shamanism, and Self- Empowerment thru Yoga, Tai Chi, Martial Arts, Music, Painting, Sculpting, Photography, as well as, working with elephants, big cats, dolphins, and sea turtles.

Along with Sobey Wing, RafaelO was the co-producer of the 2004 & 2005 Palenque Norte lecture series at Burning Man.